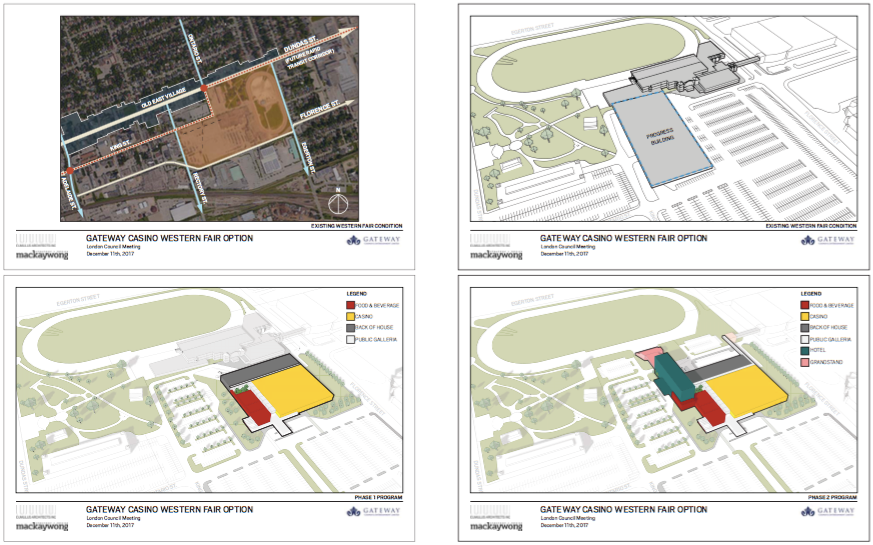 The new operator of the slots at Western Fair, Gateway Casinos and Entertainment Ltd, a BC-based company, announced plans for a $200 million expansion in May 2017. In December 2017, the Gateway presented a plan for a $140 million hotel and casino expansion on the site of the existing gaming operation at Western Fair to strategic priorities and policy committee. The expanded casino would include restaurants, a 125-room hotel, a reduced grandstand and table gaming.

The city leases land to the Western Fair through a ground lease and has a joint interest in many of the buildings on the Western Fair site. Gateway leases space from the Western Fair. You can learn more by reading this staff report. and watching Gateway's presentation to the committee (back in Dec 2017).

On Aug 30 2018, there was a community information meeting about a planning application for the lands, initiated by the City of London and the Western Fair. The meeting was an open house format and ran from 6:30 to 8:30 pm at the BMO Centre, 295 Rectory St.

On 24 Sept 2018, a staff report on the re-zoning will be considered by planning and environment committee, starting no earlier than 7pm. This is a public participation meeting, which means that anyone can speak to the issue for up to five minutes.

The planning application would allow for the phased development that Gateway Casinos has outlined, including a 12-storey hotel on site and a reduced grandstand:

You can learn more and download the related documents from the web page for the planning application.

Committee voted, 7-5, to approve expanded gambling in London. The vote was as follows:

This approval is not specific to the Western Fair site, but committee indicated its preference that the casino should be located at the site of the Western Fair with a separate vote, the results of which were as follows:

Motion to approve the addition of the words "it being noted that The Corporation of the City of London prefers an expanded location at the Western Fair District;" to the end of part b).

c)         the Civic Administration BE DIRECTED to report back on how some or all of the incremental revenues from expanded gaming, paid to The Corporation of the City of London according to the contribution agreement with the Ontario Lottery and Gaming Corporation, could be allocated to prevent, reduce or mitigate harms in the Zone SW 4 bundle from problem gambling, including fostering a partnership between the local community and the gaming operator;

You can watch the video from the public participation meeting and the debate on Youtube or on the city's website. The minutes of the meeting are also available.

Now that expanded gambling has been approved by the municipal council, the next step is up to Gateway Casinos and Entertainment Ltd.

There is a planning application, initiated by the City of London and Western Fair, that will be considered by planning and environment committee.