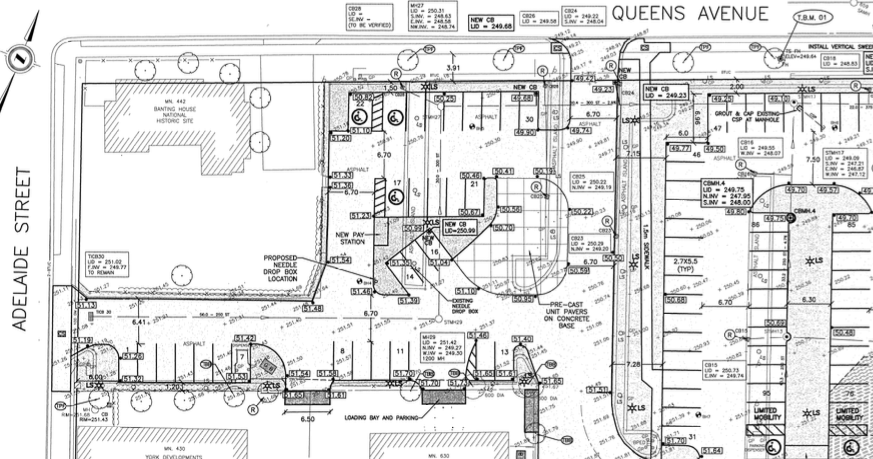 Update on 29 Sept: the project is proceeding well. The curbs and asphalt are in for Lot #1 and work on Lot #2 is well underway.

Two municipal parking lots in Old East Village — #2 (behind Banting House and the Clay Arts Centre) and #1 (behind the Palace Theatre) — will be upgraded in 2017. Drawings of the planned upgrades are available here: Lot #1 and Lot #2. Please note, there has been a recent change to the plan for Lot #1 that is not reflected on the drawing.

Did you know? Both of these parking lots are included in London Transit's "Park & Ride" pass, which includes monthly parking in one of the lots and transit travel on Dundas Street between English and Ridout Street on routes 2 Dundas, 7 Wavell and 20 Cherryhill anytime Monday - Sunday. Cost is only $60/month.

The City of London owns and maintains several parking lots in Old East Village and the Downtown core. In 2015, staff assessed the condition of these municipal lots to determine the repair needs and to identify opportunities for improvement. These upgrades are part of the transportation mobility program.

The condition assessment evaluated various aspects of the lots including required pavement, drainage and lighting improvements. Urban design enhancements were also considered. Visual pavement inspections were conducted regarding the severity of the pavement issues. Geotechnical investigations supplemented the visual pavement inspections to assess the pavement structure and underlying soil. Strategies for improvement based on these findings were noted. A sewer conditions review was also performed to identify any potential improvements that could be addressed during the parking lot upgrades.

Planning Services was consulted to provide input into which parking lots would be best suited for urban design enhancements. Lots were rated based on prominence and visibility, as well as priority in terms of their current conditions. Examples of potential design components could include landscaping features, unique signage and unique lighting.

In 2016, city funds were allocated in the multi-year budget to the Infrastructure Gap Capital Reserve Fund. On 31 March 2017, MPs Peter Fragiskatos and Kate Young, MPP Deb Matthews and Mayor Brown announced $650,000 of funding from the federal public transit infrastructure fund for these parking lots located near a future rapid transit station at King St & Adelaide St.

City staff have consulted with the Old East Village BIA throughout the development of the plans for these upgrades. There was also a public meeting hosted by the BIA earlier this year on 9 February.

Which lots will be upgraded?

The capital budget for the parking lot condition assessment was $100,000. The capital cost estimate for upgrading all ten municipal parking lots is $2,410,000. The estimated timeline for the rehabilitation of the municipal lots is recommended to occur over a four-year period, starting this year.

The recommended schedule based on the prioritization of the parking lots establishes that Lot 2 at 641 Queens Ave and Lot 1 at 434 Elizabeth St will be rehabilitated in 2017 at a cost of $1,290,000 of the total budget. Both lots will not be under construction at the same time, but they will both be completed this year.

I'm interested in your thoughts on the proposed parking lot upgrades. Please provide your feedback in the box below, email me at jhelmer@london.ca or call me at 226-926-9063 (mobile).

Members of the Civic Works Committee including Michael van Holst (Chair) and my colleagues Bill Armstrong, Phil Squire, Paul Hubert and Virginia Ridley. You can also e-mail them all at the same time.

Jen Pastorius is the manager of the Old East Village BIA. Her email is jen@oldeastvillage.com.

Peter Strack is the president of the Old East Village Community Association. His email is oevcapresident@gmail.com.