What is the purpose of the amendment?

The City of London is considering an amendment to the zoning by-law regarding the land at 809 Dundas Street. These lands are currently designated as a Main Street Commercial Corridor in the Official Plan. Main street commercial corridors are long-established, mixed-use, pedestrian-oriented business districts. The rendering of the property, as viewed from the Southeast, can be seen below: 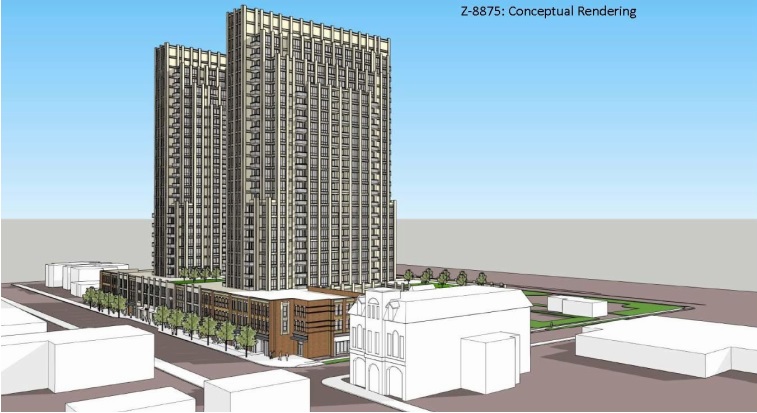 Paramount Developments (London) Inc. has applied for an amendment to the Z-1 Zoning By-Law, which currently permits a wide range of commercial, retail and residential uses with a maximum density of 250 units per hectare and a maximum height of 46 metres, to a Business District Commercial with a Special Provision Bonus Zone. The purpose of the change would be to permit a mixed-use development with two 24-storey towers containing 480 residential units and 1,845 square meters of commercial area on the ground floor. Below is a map of the proposed site and surrounding area: 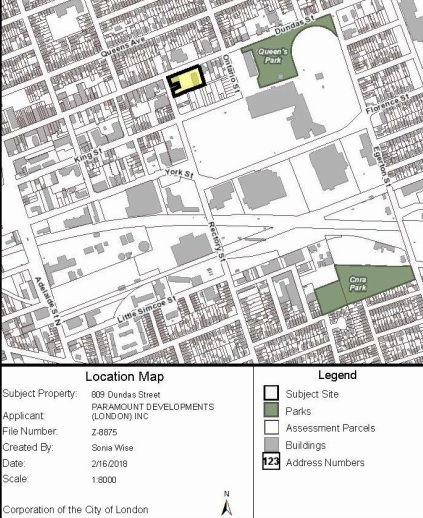 The proposed change would allow for increased lot coverage (how much of the lot is covered by a building), an increased building height of 82 metres (up from 46 metres currently) and an increased maximum density of 710 units per hectare (up from 250 units/ha currently) through the approval of a bonus zone. The bonus zone would require enhanced urban design and underground parking. This application is considered to be residential intensification under the policies of the City's Official Plan. 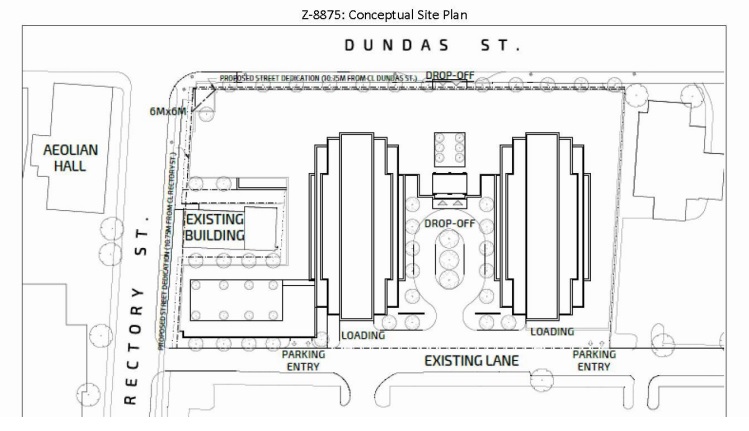 What are the next steps?

There will be a second public participation meeting at City Hall on 12 November 2018, no earlier than 7pm.

Public input is important and encouraged. Please contact City Planner, Sonia Wise with your thoughts. Please refer to the file number “Z-8875” when sending your comments. If you post comments in the feedback box below, please indicate if you would like me to share your comments with planning staff.

I'm interested to know what you think about the proposed amendment to the zoning by-law. Please provide your feedback in the box below, email me at jhelmer@london.ca or call me at 226-268-7536 (mobile).

Members of the planning and environment committee: my colleagues on the committee are Stephen Turner (Chair), Tanya Park, Anna Hopkins and Maureen Cassidy.